What gay man doesn’t have some kind of trepidation about sports?  Some are afraid of dropping the football when it’s thrown to them and getting laughed at.  Some are timid about joining in on a pick-up basketball game lest someone roll their eyes when they miss a shot.  Others are afraid of jocks in general remembering their years of torment in high school.  Many have simply opted to skip sports all together.

Some people who know me refer to me as a jock.  I play football with passion bumping and running catching intercepting and throwing the ball whenever I get the chance.  I play Ultimate Frisbee with reckless abandon:  Send me deep and I’ll come down with every disc you throw me.  Tennis basketball golf  you name it I love it.

Yet I’m afraid of swimming.

I have been since I was 5 years old and drifted too far on my raft on Long Pond got off the raft and immediately sank to the bottom.  I avoid deep water and won’t go near a wave.  I’ve never dived head-first into a pool.  I’ve never once opened my eyes underwater. 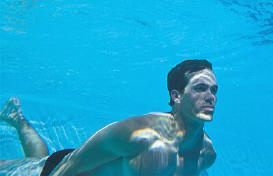 All because of my fear of it.  Fear of what? You may ask.  It’s something I’ve asked myself a million times.  Fear of drowning?  Maybe.  Fear of looking bad?  Probably.  Fear of suddenly flailing in the water having to be saved by a lifeguard?  Most definitely.

Sure I’ll don a pair of colorful board shorts with the rest of them head to Laguna Beach and prance around throwing a football or a Frisbee with friends.  But when that football or Frisbee goes into the water I’ll let it go standing there with envy as I watch the other guys having so much fun diving under waves splashing one another as they laugh together.

It was one of those days not long ago that I decided I’d had enough.

About two months ago I was talking to Shamey Cramer a member of West Hollywood Aquatics about trying to swim.

Come on out to one of our open swims at the pool  he said.

Uh no.  I’m not going out to the pool for a swim with the West Hollywood Aquatics team to embarrass myself in front of a couple dozen guys who have been swimming all their lives.

As I was saying that to him I realized that I was doing what I accuse other people of doing with sports:  I was being afraid to fail and letting that stop me in my tracks.  So what if they laughed at me?  So what if they got impatient with my lack of ability?

My biggest question before my series of four private lessons was that age old dilemma that every swimmer goes through at some point in his life:  Speedos or trunks.  You’ve got to remember:  I’d never done laps in a pool before and hadn’t taken a swim lesson since I was five.  All I knew of swimming semi-seriously in a pool was what I saw on television.  After a poll of a dozen friends the verdict was unanimous:  trunks.

So on the first Sunday in March I ventured to the pool where I was to begin my first road to hydrophobia freedom.

It was a disaster.

When we got into the water (on the shallow end of course) the instructor who speaks with a French accent so strong I can’t understand about 40% of what he’s saying says OK do the breast stroke.Do the breast stroke?  I don’t even know what that is.

He looked at me blinked a couple times and did a quick demonstration of what looked like a frog swimming.  The only problem here:  a frog can hold his breath a lot longer than I can.  Trying desperately to come up for air every three seconds I was splashing around sinking quickly then bobbing my head above the surface kicking frantically wondering what have I gotten myself into?

Next up was the backstroke.  Same result:  lots of splashing even more sinking.

At the end of the first lesson he said we were going to try diving.

I don’t do diving  I said.  As I said it I looked up to see the 3- and 5-year-olds who would be taking a lesson after me.  They were standing there as though in shock at the edge of the pool watching me.  Good to know I could provide a little humor to someone’s day.

With that we ended lesson #1 of my attempt to remain as afraid of water as humanly possible.

And someone once called me a jock?

Something funny happened on the way to the pool the following week.  A friend told me I should duck my head underwater and just open my eyes.  When I told him I didn’t have goggles he said I didn’t need them to open my eyes.  Then I whipped out the excuse I’ve always used for not being able to open my eyes under water:

Take them off  he said.

But but but . . . .   I tried coming up with a good response  to no avail.  As I headed to the pool I started wondering why I was afraid of opening my eyes underwater.  Was I afraid that my eyes would suddenly pop out of my head?  That I would go blind?  That it would hurt?  Hell I play football with a herniated disc in my back  THAT hurts.

At the start of my second lesson I dunked my head underwater and for the first time in my life opened my eyes.  I looked left looked down then popped back up.

I know  said the instructor.

I dunked my head under the surface again and opened my eyes.

As I readied to push off from the wall of the pool he added something else:  this time just relax.

I only got halfway across the pool before water got in my nose I lose my concentration and came up for air.

Back into the water I finished the lap.  My first lap.  Ever.

Over the next couple of weeks we moved on to the backstroke and freestyle.  While I still don’t have the breathing down entirely for the latter I’m now going on my own to do laps at the pool.  Slowly.  With trepidation.  But I’m doing them.

At the end of the last session the instructor said it was time to try diving again.

An openly gay collegiate athlete said in a first-person article on Outsports.com earlier this year coming out often felt like jumping off a 30-foot cliff into a deep pool of water.  I thought that was a telling image  except for the fact that I’d probably crash into the water get the wind knocked out of me become disoriented and drown.

This time as I was about to offer my standard response  I don’t do diving  I blurted out OK.

It was freezing out of the water  in the middle of one of the windstorms that have swept across southern California in the last few months.  I was glad I wasn’t wearing a Speedo.

The instructor showed me how to stand on the edge of the pool with my toes curled for extra push (of course I thought what in hell do you want to push for  I wanted to get to the water as slowly as possible).

By now in the lesson the three- and five- year olds who came after me had arrived and were watching me on the edge of the pool knees bent arms out forward head tucked standing there waiting for someone to push me in.  Seeing them made me laugh as I figured them seeing me made them laugh.  And over I tumbled.

It wasn’t the prettiest entry but it was my first.  By the third dive I got so that it wasn’t hurting my stomach when I crashed into the water.  And by the fifth dive it was actually feeling pretty good.

While I still may have to stop and take a few breaths at every turn and while I sometimes stop mid-lap because water got in my nose I can honestly say I’m no longer afraid to swim.  I’ve even started going to the pool  with other people around  and doing laps.  The pool snobs may roll their eyes but now I don’t give a ****.

Plus I’ve managed to conquer another fear I’ve always had  one that goes back to beach parties with my fraternity and summers visiting every beach on Cape Cod south of Provincetown:

But that’s another column all together.